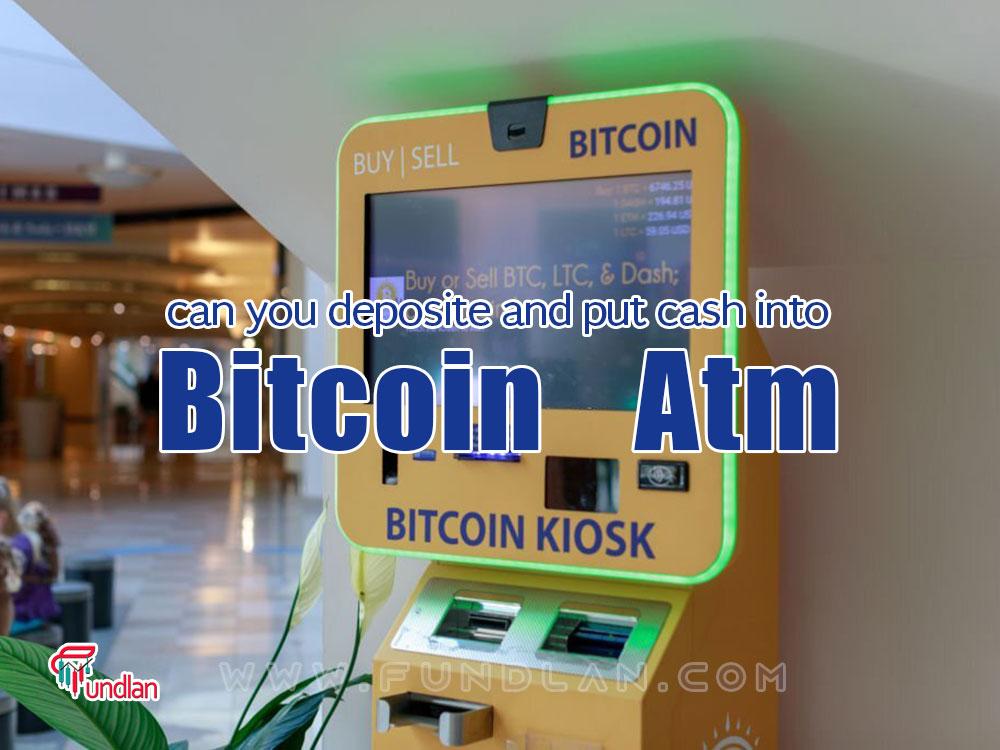 “Can you put cash into a bitcoin ATM?” A significant group of people is eager to find out an answer to this question. A bitcoin ATM is one of the safest and most secure methods to trade bitcoin and other cryptocurrencies.

These days, everyone is seeking to keep their currencies safe and secure. Hence, bitcoin ATMs can be a perfect choice. Unlike cryptocurrency exchanges, Bitcoin ATMs are completely non-custodial, ensuring that you always retain complete control of your coins.

With the assurance that you always have complete control over your coins, bitcoin ATMs let you trade cryptocurrency directly from your wallet safely and securely. Additionally, bitcoin ATMs demand a name and a phone number, depending on the value of your transaction.

To discover an answer to the question “can you put cash into a bitcoin ATM,” a description should be provided for the bitcoin ATM first. A bitcoin ATM is a kiosk with Internet access where customers may deposit cash and exchange it for bitcoin.

Even though they are commonly referred to as bitcoin ATMs, they may also convert some money for several other cryptocurrencies, such as Litecoin, Monero, Lightning BTC, Dash, Dogecoin, and more.

Although it has a catchy name, the phrase “bitcoin ATM” is misleading. At these ATMs, you cannot exchange bitcoin for cash. They do not have any bank connections, and you cannot withdraw money from them.

These devices assist blockchain-based transactions instead. Through the use of a Quick Response (QR) code, the corresponding amount of cash put in the machine is often sent to the user’s digital wallet. The user can create a new digital wallet on the device if they do not already have one.

Instantaneous transactions typically take a few minutes to appear in the user’s wallet. Most bitcoin ATMs have a maximum and minimum amount of cash that may be traded for bitcoins.

Can you deposit cash into a bitcoin ATM?

Bitcoin ATM is similar to regular ATMs in terms of functionality. This device is usually used to deposit money into a bank account. A typical ATM takes your money and updates your bank balance with an IOU that you can use to pay others.

With a bitcoin ATM, your cash is exchanged for bitcoin, which is deposited directly into your bitcoin wallet. It is also possible to purchase selected altcoins through bitcoin ATMs.

Can you use cash at a bitcoin ATM?

Before answering the question “Can you put cash into a bitcoin ATM,” it should be mentioned that a few methods exist for purchasing bitcoin.

Even though it may appear complicated, buying bitcoin via an ATM is quick and straightforward after everything is said and done. Tap the screen where you wish to purchase coins to get started. The method may alter significantly depending on the BATM; however, most machines generally have a similar buying flow.

Can you put cash into a bitcoin ATM?

This section addresses the central question: “can you put cash into a bitcoin ATM?” For using your cash at a bitcoin ATM, you have to put your money into the ATM first. You can purchase from $5 to $8500 per day.

You can also scan the QR code related to your digital wallet. So, you can easily own bitcoin cash. Afterward, you can use your money at the ATM.

This use depends on you; you can send it to a friend or make other uses as you wish. You need to follow the instructions from your wallet provider.

How to send money through bitcoin atm in the USA

A secure and convenient way to transfer money from your wallet to someone else’s is through a bitcoin ATM. You only need to enter the recipient’s digital wallet address and the amount you intend to transfer.

After that, you should check if the money has been transferred by following the simple steps on the kiosk. It happens quickly and in secret. Virtual currencies “may have long-term potential, particularly if the advances foster a speedier, more secure, and more efficient payment system,” according to a former chairman of the Federal Reserve.

Bitcoin ATMs work well for sending bitcoins to another person.

All you have to do is to sell some of your bitcoin and send it to their bitcoin wallet. But if you want to send cash to someone and don’t sell your bitcoins, here’s how you can do it: You need to have an account with a bitcoin ATM operator.

Log in to your account using ATM and specify the amount of cash you want to send and the address of the bitcoin wallet you are sending to (this time, it is not yours, use the recipient’s wallet instead.).

Enter the cash in the recipient’s bitcoin wallet; this amount of cash is deposited in the form of bitcoin, which they can cash out and withdraw.

How to send money through bitcoin ATM video

First, you must make sure you transfer bitcoin to the correct person. A transaction cannot be halted, redirected, or refunded after it has been finished. Initially, find the closest ATMs around you. To transfer money into the form of bitcoin, put cash into the bitcoin ATM. You can deposit $5 to $8,500 per day at every kiosk.

The corresponding amount of bitcoin is delivered to the recipient’s wallet. The recipient has several options for converting the received bitcoins into cash.

Is it safe to send money through a bitcoin ATM?

You might be concerned about the safety and security of bitcoin ATMs, given that they are online. Passwords and official identities safeguard your digital wallet, which is encrypted for security.

Using a bitcoin ATM is safer since your digital wallet is protected, and cryptocurrency can only be transmitted if you share the correct passwords and security credentials, such as a QR code, with someone. Most significantly, adopting a crypto BTM increases security since hackers cannot access your wallet unless they have your digital wallet key, which ensures their access.

It should be noted that bitcoin ATM is also known as BTM or Bitcoin Automated Vending Machine (AVM). Although there are always risks of viruses and hacking of bitcoin ATMs, manufacturers of BTMs are sure that users do not need to be concerned.

The fact that “bitcoin ATMs do not have capabilities enabling the dispensing of cash or the transfer of cryptocurrency without a payment made beforehand” should be noted as crucial.

As a result, the malware technology that threatens BTMs has too many technological flaws. Technology that guards against hardware and software errors is installed in bitcoin ATMs. Additionally, it is nearly hard to tamper with the blockchain, the technology that underpins cryptocurrencies.

Using bitcoin ATMs and cryptocurrencies in general also has several other benefits.

A significant advantage is how quickly the transaction is completed. There are waiting times, and occasionally transactions might take quite a while to achieve when using a conventional cryptocurrency exchange online. BTMs may securely initiate and complete the transaction in a matter of minutes.

This text addressed the question, “Can you put cash into a bitcoin ATM.” We understood that a user might buy bitcoin and other cryptocurrencies at bitcoin ATMs (Automated Teller Machines) using cash or debit cards. Besides, some bitcoin ATMs allow for trading bitcoin for cash through their bidirectional operation.

In certain instances, bitcoin ATM providers demand that customers have an active account to use the machine. Unidirectional (one-way) and bidirectional (two-way) machines are the two primary varieties of bitcoin machines. Only 30% of all cryptocurrency ATMs are bidirectional, while only 23% do so in the United States. Both versions are Internet-connected, making it possible to trade bitcoin for cash.

While some machines employ paper receipts, others transfer funds to a blockchain public key. Although they resemble conventional ATMs, bitcoin cash kiosks link users directly to a bitcoin wallet or exchange rather than to a user’s bank account. Thus, the arosen question “can you put cash into a bitcoin ATM” was quickly answered.

is forex trading worth it and reliable in 2022?